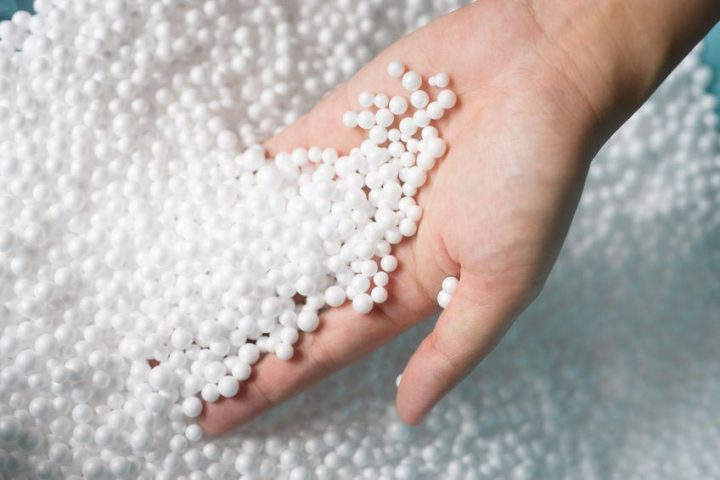 A handful of clouds… err… microbeads

Have you seen those late-night microbead pillow informercials?

Recently I overheard an exceedingly optimistic narrator on television say:

“A pillow 300 years in the making, based on the traditional Asian buckwheat pillow.”

The pillow that flashed on screen was apparently filled with microbeads. But it’s based on the buckwheat pillow?

I started a buckwheat pillow company a few years ago (go ahead, click the link up in the upper-left corner), so I couldn’t resist ordering one of these things to see what the hell it was.

I went shopping online and noticed that some of the popular microbead pillows used the term “sobakawa,” which is japanese for “buckwheat,” in in their product descriptions.

Buckwheat hulls (the hard outer shells that protect the buckwheat plant’s seeds) have been used as pillow filling for hundreds of years. Buckwheat hulls and microbeads are similar in that the individual pieces of filling are each approximately 3-4 mm in diameter. These tiny pieces work together allowing your pillow to be:

You could call microbeads a synthetic alternative to buckwheat hulls, but it’s a bit deceptive to use the term “sobakawa” to describe a microbead product that contains no buckwheat.

It turns out that most microbead pillow manufacturers don’t overtly employ the technical and often negatively perceived term, “microbead” in their marketing materials. Thus, many consumers of microbead pillows have no idea what their products are actually filled with.

Why do they avoid the term microbead? It’s because the microbeads used in personal care products have have a less-than-stellar reputation.

They have been revealed to pose a serious danger to our environment. In fact, President Obama signed a bill that outlaws selling and distributing these products. Granted, the type of microbeads used in shampoos and toothpastes are a different type and obviously used for different purposes, but the negative connotation remains.

Look at the image at the top of the page. It’s pretty hard to argue that a handful of that is anything but bad for the environment! It’s pretty yucky stuff that will sit in a landfill for hundreds of years.

“Polystyrene (microbeads) is very slow to biodegrade and is therefore a focus of controversy among environmentalists. It is increasingly abundant as a form of litter in the outdoor environment, particularly along shores and waterways, especially in its foam form, and also in increasing quantities in the Pacific Ocean.” – Wikipedia 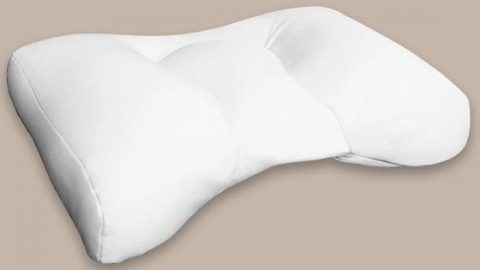 This microbead pillow’s sinister and foreboding  silhouette is complimented with a heart of evil “air beads” that will destroy the earth for your children. Sleep well!

I actually wasn’t too sure what to expect until it arrived on my doorstep. A small, very light weight box arrived. I assumed the microbeads would be heavier, like hard plastic.

I opened the box and found an 18×12″ kidney bean-shaped pillow tucked in a plastic bag along with wrinkled xeroxed instructions. It felt lighter than traditional pillow fill types like down or even polyester.

I couldn’t see what was inside the pillow, but I was able to get a good sense of the fill’s physical characteristics through its thin fabric case. I recognized the small spongey white beads as being similar to what was inside many kids’ bean bag chairs. According to the company’s marketing materials the pillow contained 10,000,000 of them. I sure hope these vaporous little bastards never escape their case!

The microbead pillow I purchased was unique. The pillow’s outer shell, or case contains the polystyrene fill in three separate compartments. The center compartment is slightly smaller to accommodate your head, neck and shoulders. The fabric appears to be some sort of a polyester blend. It’s smooth, almost “slippery” and unfortunately doesn’t look very durable.

The odd shape means you’re stuck using the funky white case it comes with. My wife hated it the moment she saw it sitting on her designer bedding!

When I pulled my microbead pillow of its plastic bag it was immediately evident that these things stink! It smells like it’s full of caulk. The odor was incredibly distracting. I even found it concerning (is this thing toxic?). I’ve had it for over a month now and it’s admittedly less noticeable than it was when it first arrived. However, it still has a strong chemical odor that I find too unpleasant to use consistently.

“Although there is evidence that styrene causes cancer in animals, it has not yet been proven to cause cancer in humans. Styrene primarily exhibits its toxicity to humans as a neurotoxin by attacking the central and peripheral nervous systems. The accumulation of these highly lipid-soluble (fat-soluble) materials in the lipid-rich tissues of the brain, spinal cord, and peripheral nerves is correlated with acute or chronic functional impairment of the nervous system.” – Resources for Environmental Justice Activists

That doesn’t sound like something you should spend 1/3 of your life on.

“As a special bonus, you’ll recieve one free pillow case” Hooray! Included with the pillow was a specially fitted case. It has a zippered opening and fits snugly over the pillow.

Reading the instructions made it clear why the pillow case was included: the pillow itself cannot be washed. The free pillow case is your only line of defense against stains and odors. The infomercial claimed that I would “… never need to buy another pillow…” That’s a pretty bold claim given that I can’t clean it.

There are two concerns in washing a microbead pillow:

The Verdict: Are Microbead Pillows Comfortable?

While a microbead pillow feels quite soft when it comes out of the box, when pressure is applied, it provides very firm support. For those acclimated to traditional soft, squishy pillows, this can take awhile to get used to. I sleep on a traditional buckwheat pillow, so I appreciate the firm and even support that microbead pillows offer. You slide your head into the pile of microbeads and they’ll magically conform to your head and neck. Not bad!

Unfortunately, it’s not perfect: the smooth surface of the individual microbeads prevents them from gripping one another. The beads slide away from one another until the fabric case restricts their movement. As a result, a microbead pillow isn’t very good at holding its shape. You’re likely to end up repositioning it more often than you’d like.

The pillow’s three separate compartments are apparently required to prevent the fill from bottoming out.

Without them your head would likely sink too deep. Consequently, the microbead filling would all collect around your ears, providing woefully inadequate support. It’s actually similar to a millet hull pillow in this regard. Despite the separate fill compartments, it felt as though my head was buried too deeply in the pillow. The two side compartments pushed upwards on either side of my head making me feel somewhat claustrophobic.

After some use, the pillow is considerably thinner than when it arrived. All pillow filling types degrade over time and loose some of their loft, but this happened rather quickly.  I slept on it for at least 3 weeks and my kids gave it some good abuse in their pillow fort. It seems that, with pressure, the microbeads’ shape degrades rather quickly. They haven’t sprung back to their original shape.

As it happens, the pillow was initially too thick for me, but after some use, it has a more appropriate loft. I assume that with continued use, it’ll be far too flat. User reviews show this is a consistent problem with microbead pillow fill. Unfortunately you can’t just add a bit more to the case, as it’s sewn shut.

The real deal-breaker was the smell.

The strong chemical odor was not pleasant. It was a real distraction to me falling asleep. Some users have reported headaches that they attribute to the off-gassing of their pillows. I personally never felt any adverse affects like headaches. Still, I can’t help but wonder if it’s really safe to breath those fumes every night.

I gave the microbead pillow an honest shot, but I couldn’t wait to return to my reliable buckwheat pillow.

Anyone who is considering a microbead pillow should first give a buckwheat pillow a try. A buckwheat pillow is more comfortable, safe for you and the environment, is more durable, and doesn’t smell like paint!

Don’t take my word for it, check out these honest reviews from our customers.

8 Responses to The Microbead Pillow Will Comfortably Ruin Us All

My Sobakawa Bead pillow is just a little too stuffed/filled and I dare not open it to reduce the filling, so guess I’ll just put a huge book on it until it flattens a bit. Mine is 21 x 13 so maybe there is a smaller size~? You mentioned 18 x12.

If it’s filled with polystyrene, it’ll flatten out pretty quickly if used consistently. Give your book technique a try.

I actually Love that microbead fake Sobakawa pillow. The pillow conforms for my neck and the spandex fabric it’s stuffed into is so the pillow has give. The beads in that image aren’t Micro beads. So you didn’t get the actual micro bead pillow the micro beads are so tiny that about 6-8 of them are equivalent to 1 sesame seed, I suppose they should be called nano seeds.I ordered a cushie pillow that said micro beads it’s nothing like that advertised sobakawa pillow. Sure they deceived the public with the late night ads- it appeared you would receive a standard size pillow but they instead would send you a pillow a bit larger than a travel pillow. None the less the pillow was really great enough where I’m commenting on your comments in 2020 in search of that very fake pillow. I usually sleep on down but they like buck hulls are getting to expensive to try them later you’re up at all times of the night just trying to sleep.

I purchased the micro bead Sobakawa pillow and was very disappointed….it has such a strong chemical odor. It gives me a headache and I can’t wonder how unhealthy it is to breath the fumes that are very strong….even after weeks of trying to out gas the thing outside in cold wind and warm air…it just has not gone away. I would not advise anyone to purchase it….totally a waste of money and health. Take your money and buy something more natural. I wonder if the buckwheat version which sounds healthier would be a good alternative, but can you wash buckwheat?

You can wash a buckwheat pillow, provided the case has a zipper. dump the hulls out, set aside (or replace them if necessary), and then wash the case.

I used to have a microbead pillow two plus years ago after trying countless pillows and money wasted, and found this was the best pillow ever. I couldn’t remember the brand, so I saw this pillow on website and ordered. Don’t know if this is a similar or same pillow I had, but I will find out when I receive it, if it satisfy my head and neck as I expect.

Did it contain hard or soft beads? The one I tried contained softer beads made from polystyrene. I would imagine that you could get all sorts of different feeling pillows by varying the shape and size of hard plastic beads.

“Unfortunately you can’t just add a bit more to the case, as it’s sewn shut.”

Have you ever heard of scissors, needle and thread? 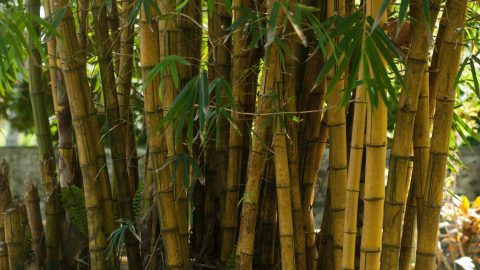 The Disingenuous and Sneaky Bamboo Pillow

Judge for yourself! Sleep on Hullo for 60 nights. If it's not for you, just ship it back to us and we'll refund the purchase price.