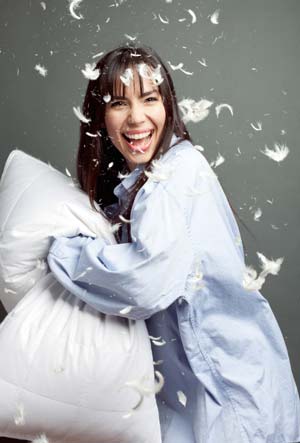 “This down pillow has ripped open and it’s so funny! My step-father, Steve, will clean up the mess when he gets home.”

Some people swear that feather and down pillows are the only way to sleep. I myself have slept on down pillows for most of my life. There’s a lot to like. They’re durable, moldable, and work reasonably well for all sleep positions.

Unfortunately feather and down pillows come with some baggage.

Cleaning can be difficult.

I have personally destroyed several down pillows and at least one comforter in the wash. I’m sure many of you have done the same. It’s quite easy to ruin things filled with feathers and down.

Thus, you have to be careful:

Proper cleaning of down and feather pillows will help them last longer, if you can do so without damaging them in the process.

Down and feathers don’t grow on trees.

That’s right, you heard it here first… down comes from ducks and geese! While you might expect that there are humane ways of obtaining these feathers, in reality it’s probably traumatic for the birds no matter how it’s done.

80% of the down and feathers used in products are produced in China. The production techniques can unfortunately be grim. 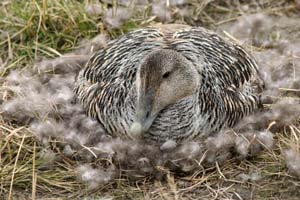 Would you tear out this poor mother’s feathers?

How are feathers removed from birds? There are three unpleasant methods:

Those who are concerned with animals’ well-being, should be aware that purchasing many down products may result in the poor treatment of animals.

Pillow shoppers that are committed to their down filling AND want to treat birds with respect should look for products manufactured using The Responsible Down Standard (RDS). RDS is an independent, voluntary global standard that recognizes and rewards the best practices in the harvesting of bird feathers.

Down and feather pillows have an unfortunate tendency to flatten out as you sleep.

Light and fluffy is great if all you need is cuddly. However, when sleeping, your head and neck need proper support so that your muscles are relaxed and your spine is aligned in a straight line. It’s hard to get that support when your pillow turns into a pancake in the middle of the night. Down and feather pillows generally suffer from a lack of consistent support. They tend to flatten out under the weight of your head during the night causing a downward bend in your neck. They require frequent refluffing and adjustment to maintain loft and support.

Feather and down pillows retain heat.

Feather and down filling is frequently used as insulation in comforters and sleeping bags. It is terrific at keeping the warmth in and the cold out. Unfortunately that isn’t ideal in the context of pillows. Feather and down fill types retain body heat, which can make your pillow hot and uncomfortable, particularly during the summer months. The fill can restrict free air flow preventing heat from escaping. Repeatedly having to flip to the cool side of your pillow is not conducive to good sleep. By the way, that mold I mentioned… It loves the savory conditions of your sweaty down pillow!

NOTE: Contrary to a vocal (and misinformed) minority, allergic reactions to feather and down pillows are rare.

Down is often blamed for causing allergic reactions. It turns out that genuine feather allergies are quite rare. Most reactions can actually be attributed to dust mites or mold, both of which can thrive inside a down pillow. Down feathers tend to become more allergenic with age – they slowly become more and more contaminated. For this reason, some recommend that down pillows be replaced as often as every 6 months. That can get pricey in a hurry!

Try this (very different) alternative to down and feather pillows…

I would have been stuck with my sad squishy down sack forever, but thanks to a friend’s recommendation, I tried a buckwheat pillow. I wasn’t an instant convert; it was very different, so it took some getting used to. But, after about a week, I was sleeping much better. I tossed out my down pillow. A year after that I was manufacturing my own buckwheat pillows. Yes – I love them that much! Don’t take my word for it. Our customer’s reviews speak for themselves! I love this testimonial from a feather pillow convert:

“As far back as I can remember using a pillow at night, I’ve used a feather pillow. Pillows stuffed with the softest down have been my default, my go to. I haughtily looked down on pillows of any other type. This was even though I’d been growing more dissatisfied with my feather pillow’s tendency to wake me in the middle of the night because it’s lofty support had degraded and squished away through after a few hours…

The first week was difficult. I was so used to the soft, plushness of feather pillows: the buckwheat pillow felt like a slab of concrete in comparison. But, then the second week hit. By then, my muscles were well adjusted. The pillow start to feel supportive rather than hard. I was a convert! This pillow is great. It excels at all-night-long support and good breathability. Unlike my feather pillows of the past, this pillow works with/for me, rather than against me. What a fantastic pillow!” –Geoff, verified Hullo customer

Looking for other alternatives to down and feather pillows? Check out our guide to types of pillows available.

15 Responses to Feather and Down Pillows: Feather Faults & Down Deficiencies!

What do you do if your down pillow has a little bit of down feathers sticking out? Is there another way except for getting battings or down proof cases?

If there are feathers sticking out it could a be feather pillow not down or you have a really poor ticking.

Yes, that’s correct. Additionally, many “down” pillows are a blend of feathers and down.

My down pillow is very old and has lost it’s loft. I knew it was a problem but I hadn’t felt ready to replace it yet until I stayed with a friend for a week and I forgot ‘my’ own personal down pillow that goes everywhere with me. She had 4 scrumptious down pillows on her guest bed. I was in heaven and haven’t been able to get comfortable since. Last night in the wee hours of the night I had had it with trying to plump my old dead pillow. I got out of bed and ripped open an old down coat that no longer fit anyone in the house. It had been put away for years. I sewed a double stitch line around a pillow case using the straight stretch stitch for tightest coverage leaving and opening for my arm to stuff the feathers in. An hour later I had a wonderful new pillow, a huge mess in my living room, and down covering me from head to toe. I laughed as I brushed it out of my hair. (I also had tied a long sleeve tee shirt around my face bandanna style to keep from breathing in the down.) Oh my I had the best night sleep in a long long time.

So, I have had my feather/down pillow for a while now. They feel heavier for some reason. The previous feather pillows I had were taken to a dry cleaner to (retick?) They explained to me that they took the feathers out and tumbled them and put on a new covering. They said that the pillows get heavier because of the mites that collect in them. Is this true, can this happen? If this is the case should they be replaced or is it safe to refurbish them?

I have heard the same thing about dust mite build up. I suspect that it is an exaggeration. My advice: keep your pillow clean by regularly washing your pillow cases. If your pillow is starting to look/feel a little less than perfect, replace it.

I bought some cheap duck down pillows in line – the pillow cases have black stains on them. Grease/oil coming through. Any ideas?

My only guess is that it’s mold 🙁

I’m looking for recycle uses for my old feather pillow. It isn’t all down.

Hello – I absolutely love my white goose down feather pillow – but the other day – after 37 years – the seam came loose on the ticking. I got some ticking material and sewed another one but can I just take the ticking together with the feathers and put both in the new ticking? It would be much easier. Let me know – greatly appreciated. to me it would be just like having a pillow protector?

That will work, although it will make the pillow less breathable. That will result in it retaining the body heat it absorbs, which may make it less comfortable.

I heard you have to pay attention that the label says “New down” (or similar), otherwise you can get cleaned and recycled down from beddings given away. Is that true?

All bedding products in the USA that have been used or returned MUST be clearly labeled as such on the legal label.

My therapist told me to get an old fashioned feather pillow to put between my legs to help keep my hips level. But I don’t know what one to get. Any suggestions. 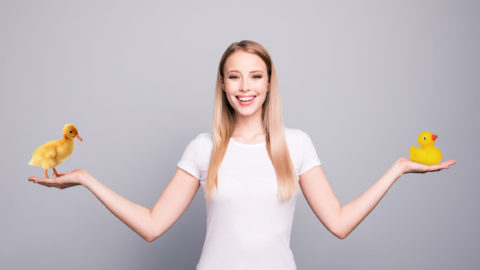 Is a Gel Fiber Pillow Superior to a Genuine Down Pillow? 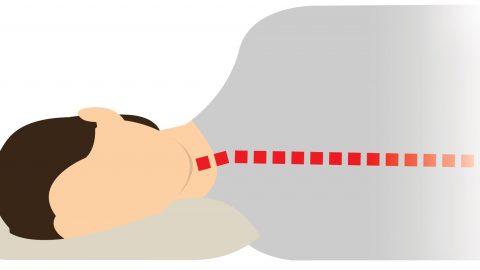 Sleeping Position and Choosing a Pillow 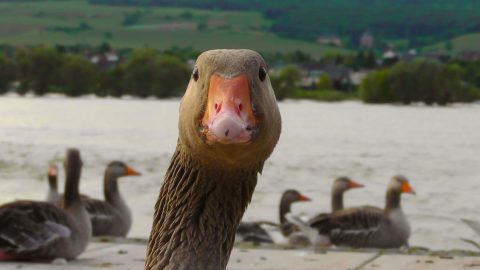 What Is The Responsible Down Standard?

A Superior Alternative to Feather and Down Pillows

Have you ever tried a Hullo buckwheat pillow?